Opened in 1963, Pukekohe Park Raceway is roughly 40 kilometres south is the NZ capital, Auckland and over the years has seen a massive amount of motorsport royalty laps the 2.91km 11-corner circuit. Having had its final Grand Prix race in 2000, the Supercars Championship raced here until 2008, then following a 5-year break, headed back to the iconic track after a $6.6M upgrade.

Coming away from the previous round at The Bend Motorsport Park with two podiums and a pole, Chaz Mostert in the No. 55 Supercheap Auto Ford Mustang was heading to NZ holding second place in the championship. Having stepped on the podium in NZ last year, Chaz was confident that the current progress and success could be repeated.

“It’s always good to head across the ditch, they always have a huge crowd out at Pukekohe and the Kiwi fans are great to race in front of. We’ve made some good progress lately in the Supercheap Auto camp, we’ve got our Mustang running well and we’re closing in on the car up front. Last year we were able to grab a podium here, so we’ll aim to roll off strong again and have a red hot crack at the top spot.”

Team Principal Tim Edwards was also confident that Chaz and the team were in a good position and with previous success in NZ, the chase for the top step on the podium was definitely possible.

“We’re looking forward to the weekend and a chance to keep improving as a team. We’ve been edging closer to the front and very well could have had a win or two in Tailem Bend, so we’re really chomping at the bit to finally get back to the top step. Pukekohe has been pretty nice to us the last few years, so if we can roll off well we should be in the hunt again for a really positive weekend.”

Friday’s practice sessions weren’t ideal for Chaz and the team, coming away with no posted flying laps in P1, he came back in P2 and was able to but although being a little off the pace, he was still able to post a time of 1.02:18 and 12th fastest.

“Obviously the team cars are pretty quick, and the car felt pretty good for me, but just a little bit down the order today. I don’t want to be too alarmed, we’ll come back tomorrow, we’ve got another practice, and we’ll get into the day, so fingers crossed we’ll turn it around.”

Tim Edwards was also quietly confident that Chaz would bounce back for Saturday’s action.

“You can’t be upset leading both practice sessions, but it’s just that, practice. We’re pretty confident in our cars and Cam and Chaz will be quicker tomorrow, we’re not concerned about that. The field was really close today and with the potential for rain tomorrow, it could be a pretty exciting day. But for now, we’ll do our homework, see what more we can get out of the cars, and go again tomorrow.”

Saturday got off to a great start for Chaz who bettered his Friday practice time in P3 with a time of 1.01:90 making him outright fastest in the session. With his confidence on a high, he then backed up his performance in the hotly contested qualifying session with an even faster 1.01:78 which put him 4th on the grid. Unfortunately his luck for the day ended there as he and his team-mate Cam Waters had a racing incident during a battle into turn 5 and Chaz’s car came off second best. Chaz managed to limp the car back to the pits so that the team could get it back on the track. The damage was bad enough that he sat out for 14-laps of the race, but was still able to cross the finish line to finish in 24th place. 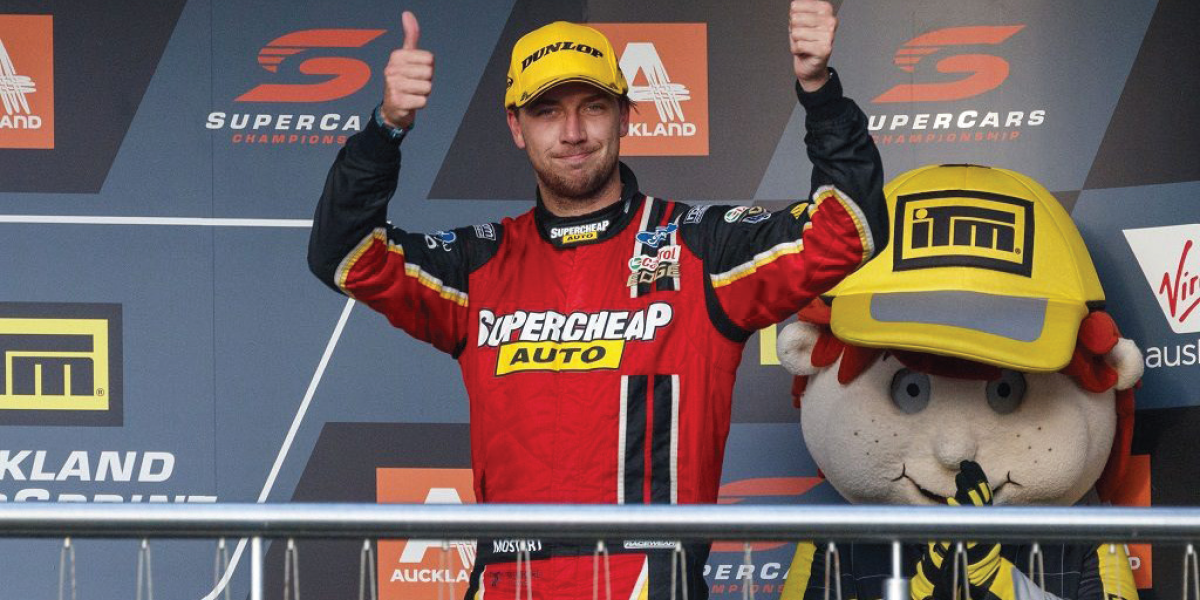 “What do you say, I guess this place just hates me some days. We made the car a fair bit better today, car had good pace, and obviously we were on for a podium if it all came together, then unfortunately Cam and I got together there in Turn 5. We were racing hard, I had warmer tyres so I thought I’d be able to get around the outside, but he went just as deep as me and locked up, and that was that. Broke some bits on the front corner and we had to scramble just to get points. Tough day, we’ll try to make it a better one tomorrow.”

Although being disappointed for the team and Chaz about the incident which lost the Supercheap Racing Mustang a podiu position, Tim Edwards was positive and already looking forward to Sunday.

“Its great to have Cam back on the podium and Lee in the top five, but obviously really disappointing for Chaz and Will. The positive is we had four really fast cars, two ended up in the top five and the other two were in the running for the podium. As for Chaz and Cam getting together, they shouldn’t have, they were both on the limit like they usually are, and they crossed that line. You hate to have it happen, we really should have had at least two cars on the podium, so it’s a tough pill to swallow, but tomorrow’s another day. If we can bring today’s pace back tomorrow we’re every chance to have another strong result.” 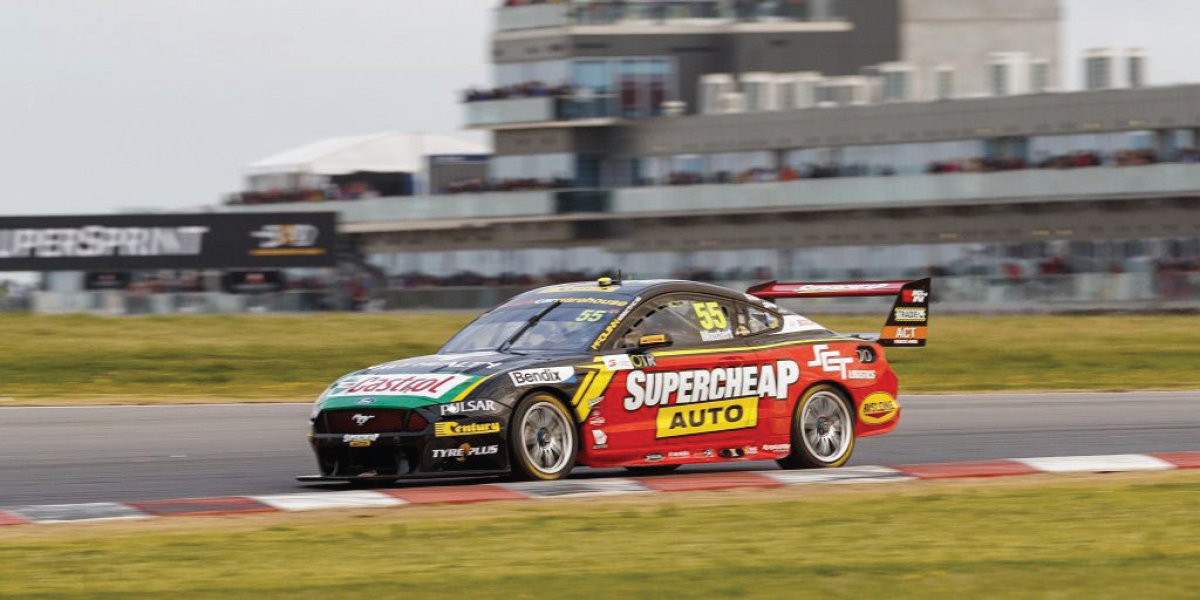 Sunday was a great comeback for the No. 55 Supercheap Auto Ford Mustang with Chaz making his way back onto the podium for the 12th time this season. Having finished 3rd in Qualifying with a time of 1m01.63s, then 7th in the Top Ten Shootout slightly slower with 1m02.02s, Chaz managed to miss out on the Safety Car dramas which affected the overall positions of his team-mates and bought the Mustang home in 3rd position, but was clearly disappointed for the other Tickford drivers.

“I had a lot of pressure from Nick (Percat) there at the end, but yeah, what a crazy day. Really should have been probably racing for probably seventh or something like that, but yeah, just ended up with a trophy, don’t really understand how. Everyone’s obviously pretty disappointed, as you would be, you know you’ve had a guy like Lee Holdsworth start on the front row today, Waters started up there too, and yeah unfortunately they’re probably the guys who deserved to sit up here today.” 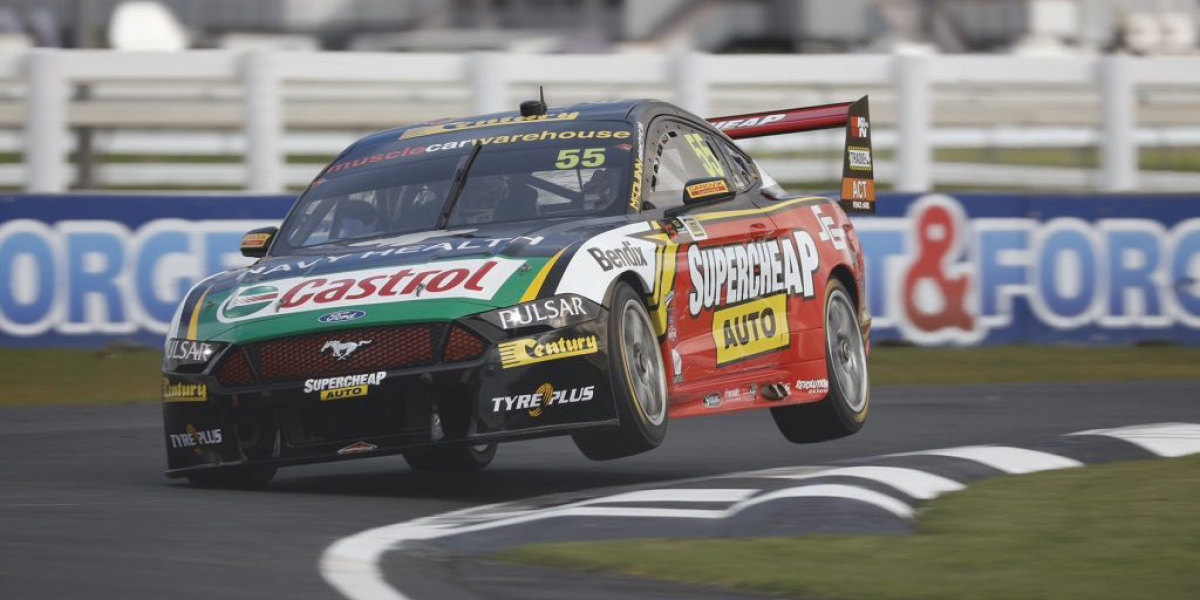 Team Principal Tim Edwards against pointed out the positives of the event, but suggested that the disappointment from the Sunday race will only make the drivers more eager to do well at Bathurst.

“The positives come first, we had excellent car speed all weekend, and its great to come out with a couple podiums. I think it’s safe to say we were the fastest Ford team all weekend and the fastest team outright for a majority of it, which is credit to the team. But what happened today is beyond disappointing, to have three of our cars taken out of the running by something out of our control is incredibly frustrating. It shouldn’t have happened and our drivers, engineers, and crew don’t deserve to be done like that. There’s a fire under all four camps after that, and we’ll be ready to give it our all at Bathurst next month.”

With the unfortunate result on Saturday, but great comeback on Sunday, Chaz managed to retain his 3rd outright position in the 2019 Virgin Australia Supercars Championship behind SVG. The championship continues from October 10th for the iconic Supercheap Auto Bathurst 1000. 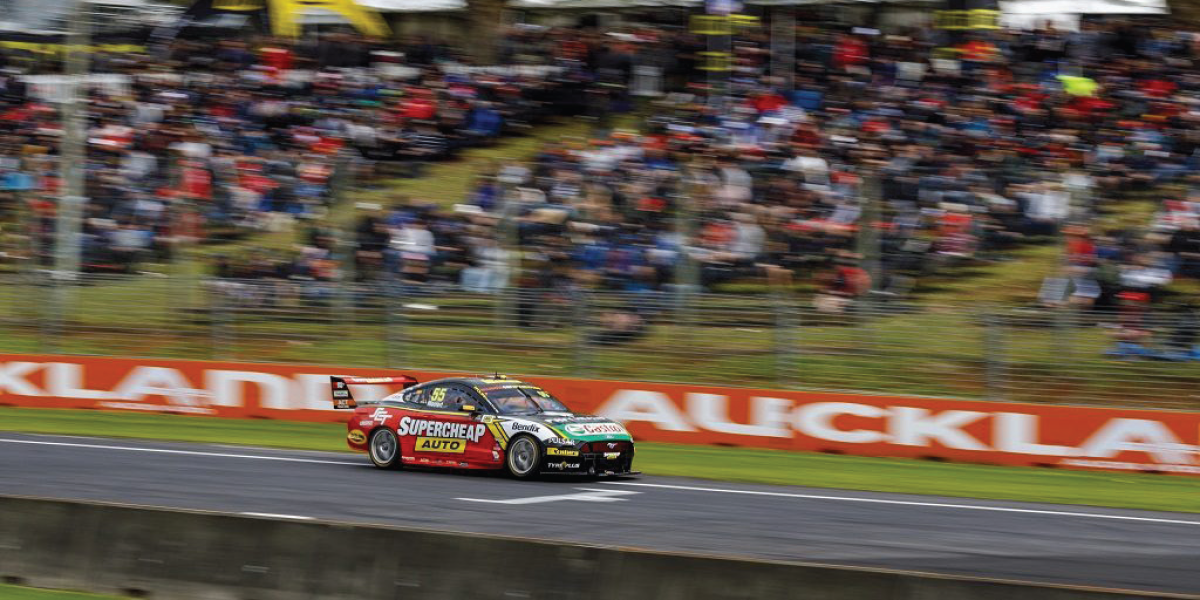