Here at Bendix, we’re what you might call die-hard Toyota fans, so when the opportunity to head down to the long-running Toyotafest event came up, we knew we’d be there with bells on.

Toyotafest attracts fans of the Japanese giant all over the country and with 2018 marking the event’s 15th consecutive year running, these meets keep getting bigger and bigger! Every corner of Toyota’s immense history is represented at Toyotafest, bringing everything from daily drivers to uber-valuable motoring icons out to play, which made it quite a challenge to pick our favourite eight.

But we pushed through! And without further ado, here’s our September 2018 edition of Cars of Bendix!

When Toyota first released the AE86 to the masses back in 1984, they probably had no idea the kind of following they would amass decades later, and it’s easy to see why. You’d be hard-pressed to find a more versatile platform than the humble AE86. With the right amount of modification, they’re just as happy tearing through the twisties as they are smashing lap times. They seemingly get more and more valuable as the years go by with no signs of slowing down, so it’s not uncommon for those lucky enough to have an AE86 in their possession to keep them clean and pristine in the garage, never to see the light of day. Not Alec though. Alec’s AE86 Corolla Levin is built for one thing and one thing only – fun. Which is what the AE86 is all about. The old-school Japanese tough style is absolutely evident in Alec’s build, decked from top to bottom in the kind of gear designed to turn the Levin into a mountain road-eating monster. Fully restored and modified by Alec himself, this Levin perfectly encapsulates the Hachiroku’s grassroots spirit. The J-Blood widebody kit makes this AE86 an intimidating sight in any rear-view mirror. Fitted with a more modern ITB-equipped 20V 4AGE, expect this AE86 to be a challenge to shake from your rear-view mirror too. The AE86 handles corners like a go-kart thanks to a TRD 2-way diff, brakes off a Mazda RX7 and a set of period-correct Watanabe wheels shod in Hankook RS3 rubber. The tough spirit is alive and well in the Hachiroku. 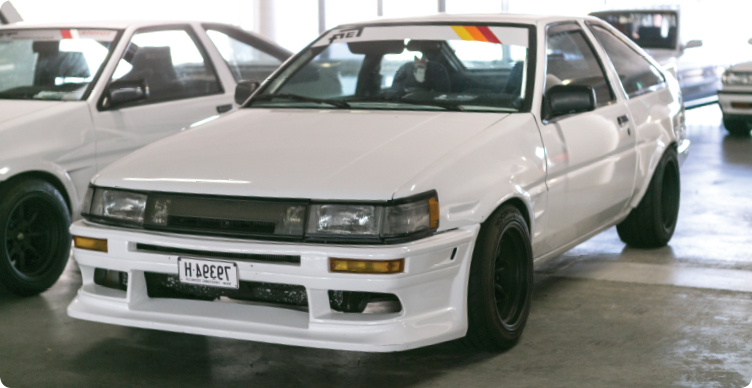 Minitrucking is somewhat of a lost art these days, but there’s a select few out there that keep the movement alive. Thomas and his Toyota Hilux are absolutely proof of that. This Hilux is lightyears away from being the utilitarian ute it left the factory as, and it’s made all the better for it. Built by Image Conversions, this Hilux sits low and goes hard. First and foremost, with minitrucking is style and this Hilux has that in spades thanks to a custom air suspension setup, immaculate custom blue paintwork, colour-coded wheels, a cream leather interior and big tubs all round to accommodate maximum tuck. Pop the bonnet and you’re treated to a surprise in the form of a 2JZGTE with a big single turbo setup sitting amongst the shaved and tucked engine bay. Who said you can’t have all show, AND all go?

Some of you Toyotaheads out there might call this blasphemy but we call it an amazing bit of DIY engineering. Built from the ground up by Ernest himself, his 1975 Celica is the result of decades of work and dedication. The first thing you notice when it rolls past is the spectacular amount of noise it makes with the slightest prod at the throttle. The enormous bonnet cowl suggest that this Celica is a far cry from the way it left the Toyota factory back in 1975. And you’d be right. Under that custom-sculpted bonnet lies a Ford Cleveland V8 stroked to 408 cubic inches (as the plates so cleverly suggest) and fitted with alloy heads. The power is sent to those enormous rear treads via a Power Glide transmission with a trans brake and big stall convertor and 9-inch differential. The Celica futures a full cage, disc brakes all round and 18 x 33- inch tubs to accommodate the girth of those tyres. Ernest has left

absolutely stone unturned with the only original bits left on the Celica being the roof, the glass and the lights.

Toyota has a habit of keeping some its best cars exclusive to their homeland. Case in point – Man’s UZS171 Toyota Crown Majesta. A JDM exclusive, the Crown Majesta was designed to cart around Japan’s elite in the utmost style and comfort, rivalling and surpassing that offered by its German rivals. To account for the Majesta’s substantial amount of weight, Toyota fitted it with their 216kW 4.0L V8, making for some smooth sailing down the Wangan. These things absolutely exude style and class, so it’s no surprise that they’re considered the big boss of Japan’s VIP scene. Man’s brought that VIP flavour down to Australian roads with his very own Majesta, outfitting it with 19-inch Work Lanvec LD1 wheels and dropping it to the ground AirREX air suspension. Watching it air out is certainly a sight to behold. Inside, Man’s lavished the Majesta’s immense interior with only the finest VIP appointments, from the Junction Produce neck pillows to the Garsons D.A.D VIP table. If you ever want to cruise around like a Yakuza boss, this is how you do it.

The Corolla has seen countless iterations in the decades that the namesake has been around. It’s not always been a hatchback either. Two-door sports car Corolla? It’s been done. Corolla wagon? You bet. Corolla 4WD? Most certainly. Kevin’s AE95 Corolla 4WD was definitely up there with some of the most unique rides at this year’s Toyotafest. In standard form, the AE95, despite being equipped with 4WD, isn’t the most capable off-road vehicle, but as Kevin’s proven, it does make the perfect platform for an off-road build that’s more than capable of embarrassing the big boys. Kevin’s built his Corolla as a budget off-roader, and he takes the budget part very seriously with budget set at the price of two cases of beer for each mod. Being pretty handy with the tools helps keep costs down too. The AE95 was given a more modern heart in the form of a 1.8L 7AFE from a later model Corolla, to keep the wagon reliable and give it a bit more pulling power out in the wild. To unlock that off-road potential, Kevin’s outfitted the Corolla with a 4-inch suspension lift and a set of oldschool 14-inch ROH Reflex wheels wrapped in some hefty retread truck rubber. Kevin’s also fashioned a custom intake snorkel for the humble ‘Rolla to keep the 1.8L breathing in the event of a river crossing. Given that Kevin takes his Corolla far and wide, comfort is important so he’s also fitted the budget off-roader with heated seats out of Subaru and retrofitted a cruise control system out of a Camry. Kevin’s build is one that not likely to end any time soon, so we’re keen to see where he takes his humble 4x4 next!

We didn’t get a chance to catch up with the owner of this trackspec SW20 MR2, but the spec list had us drooling, so we figured a feature was definitely in order. From the outset, you can tell that this weapon was built for one purpose, and one purpose only – to absolutely demolish lap times. The MR2 is notorious for being quite a handful in the corners thanks to it’s mid-engine RWD layout, so every effort has been made to keep this MR2 as manageable as possible around the track, with enormous bits of aero scattering the car, a set of Supershock coilovers, a TRD LSD and a fat set of 275 semi slicks for the rear to keep it planted to the tarmac at immense speed. Braking is taken care of by big Supra rotors at the front and RX7 rotors at the rear, whilst still maintaining the OEM brake calipers, proving more than enough for such a light car (1000kg!). Powertrain-wise, the MR2’s 3SGE engine has been ditched in favour of a custom-built 2.2L 5SGTE with all the trimmings. Eagle rods and JE forged pistons keep the motor reliable and the head has been fettled with, featuring Supertech valves and valve springs. Strapped to the side of the

block is a Garrett 3017R turbo with an 0.83A housing fed by an enormous Frozen Boost water-to-air intercooler. The results is a healthy 320kW at 25 PSI. All this work has culminated in a best time of 1 minute 4.8 second at Wakefield, which is simply an amazing feat.

Todd’s 1981 RA40 Toyota Celica Liftback the most colourful history of any car we’ve ever come across. Blending in relatively easily in the sea of Toyota metal, it wasn’t until we spoke to Todd that we realised just how special his Celica really is. Todd found his pride and joy up in Bombaderry, not having any idea the kind of gem he had stumbled across. Once you move around to the rear end and see the rear garnish sporting the word “turbo” in big letters, you realise that this is no ordinary Celica Liftback. A man by the of Laurie Stewart saw a big opportunity in turbocharging, a technology that was still relatively new. With most turbocharged cars being in a more unattainable price bracket, Laurie set out to create a turbocharged sports car for the masses. He took the RA40 Celica Liftback and outfitted it with his very own turbo kit along with some suspension upgrades to help the chassis keep up with its new-found power. It was even offered with factory Toyota warranty! Unfortunately, they only ever saw production to be used as race cars, apart from two that were destined for road use. One is apparently long gone, leaving Todd’s Celica the only Laurie Stewart Turbo Special is existence today! Todd has kept the car in absolutely mint condition, fitting for a car that’s the only one of its kind, but that doesn’t mean he doesn’t enjoy it the way Laurie Stewart intended from time to time. 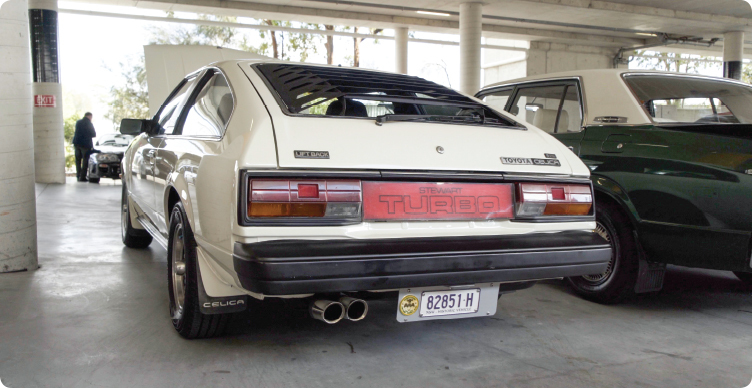 The Lexus IS is yet another example of Toyota keeping it’s very best offerings for Japan. In Japan, the IS was released as the Altezza and the top spec offering came equipped with a 147kW high-revving 2.0L powerplant in the form of the BEAMS 3SGE. Here, we were offered less sporting models such as the 2JZGEequipped auto-only IS300 and the 1GFE-equipped IS200. But the good news? Everything available for the Altezza bolts straight onto the Lexus IS. Isaac’s been building his IS200 for some time now and the results speak for themselves. Isaac is all about being different and his wheel choice speaks this in volumes with his IS200 sporting a set of beautiful Maserati wheels. Isaac’s also given the IS200 a few aesthetic touches such as the Greddy front lip and the GTR N1- inspired front bumper vents to give the classy cruiser a bit more road presence. The piece-de-resistance though? What lies under the bonnet. Long gone is the asthmatic 1GFE that the IS200 came equipped with from factory and in its place, the venerable 2JZGTE. The infamous straight six hasn’t gone untouched either, with a Precision 6266 turbo bolted to it via a 6Boost manifold. Fuelling is taken care of via Bosch 1250cc injectors and 2 Walbro 460 pumps. The result, with a helping of E85, is a gargantuan 500kW at the wheels. Certainly a far cry from the 114kW it rolled out of the factory with.

For more information about Meet & Eat events and how to attend visit: facebook.com/MeetEatSydney

For updates and news, visit the Bendix Facebook page at: facebook.com/bendixworkshop